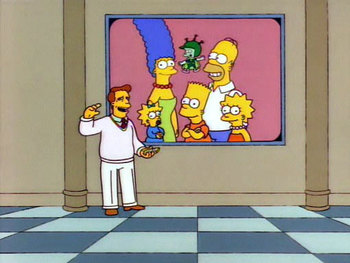 Troy McClure reveals that Fox is desperately trying to create new shows for their Sunday night line-up, believing the "only" popular shows on the network were Melrose Place, The Simpsons and The X-Files.note With the likes of fellow hit shows Martin, Married... with Children, and Living Single were either on their way to being canceled or already gone while a bunch of short-lived, forgotten shows have come and gone.

Initially, this episode was made due to FOX asking Matt Groening and his crew from The Simpsons to come up with a brand-new show. They didn't come up with any (that is, until Futurama), but they did supply three pilots for Simpsons spinoffs:

Chief Wiggum P.I. (Police action shows from the 1970s and 1980s) — Clancy Wiggum, the corrupt, now-former Chief of the Springfield Police Department and a single father, has gone into business for himself in New Orleans with his partner Seymour "Skinny Boy" Skinner (aching to return to his Big Easy roots) along for the ride. In this episode, Chief Wiggum's son Ralph gets kidnapped by a Southern crime lord and the crime-fighting duo must find him.

The Love-matic Grampa (Cheesy fantasy sitcoms of The '60s, My Mother, the Car in particular) — Having "got lost along the way" to Heaven, Abe Simpson's spirit now inhabits the "love tester" machine at Moe's Tavern and gives the bartender tips on how to win over women. In this episode, Abe helps Moe score a date with a woman who enters his bar asking for roadside assistance — but when Moe gets date jitters, he sneaks the machine into the restaurant.

The Simpson Family Smile-Time Variety Hour (Variety shows of The '70s, specifically The Brady Bunch Hour and Laugh-In): The Simpsons, minus Lisa — who declined to participate and is replaced by a blonde teenager — host a cornball 1970s sketch comedy show, with special guest star Tim Conway.

McClure ends the show with a mock preview of the upcoming ninth season, which will include magic powers, multiple weddings, long-lost triplets, and Homer befriending a tiny, green space alien named Ozmodiar that only he can see note It should be noted that although none of those plots happened in season 9, all of these came true in later episodes to some extent: the magic powers were mostly seen in the Halloween episodes, episodes such as "There's Something About Marrying," "Wedding For Disaster," and "Rome-Old and Juli-Eh" featured crazy weddings, "Double Double Boy in Trouble" had Bart meet a boy who could be his long-lost twin, and the season 12 episode "HOMR" featured a brief appearance by Ozmodiar.