Series / My Mother the Car 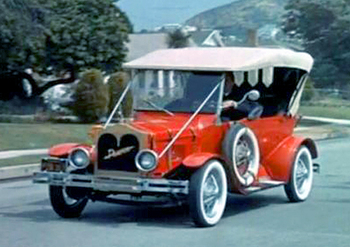 In 1965, NBC was looking for a show to air on Tuesday nights opposite Combat! and Rawhide. Their answer: this Fantastic Comedy series about a woman who's been reincarnated as an automobile.

Jerry Van Dyke starred as Dave Crabtree, an attorney and typically hapless sitcom family man who discovered that the spirit of his deceased mother (voiced by Ann Sothern) had returned to inhabit a 1928 Porter open touring car. Most plots involved Dave getting into situations with his family and neighbors, and dealing with the various headaches of owning a vintage car. The show even had a recurring villain in Captain Manzini (Avery Schreiber), an obsessed automobile collector who was bent on acquiring Mother to complete his collection. (Apparently it was the only make and model of the car to exist.)

There is no real-life "1928 Porter"; the company was meant to be fictional and the actual car used on-set was one of two variations of a Ford Model T. One version was made for normal driving shots. The other was a "stunt" car, built to be driven by a hidden driver (to make it appear like a Sentient Vehicle). The "stunt" version was modified by the then-ubiquitous George Barris, who also helped to create the Monkeemobile and the 1960s Batmobile. Both vehicles survive; the normal version is owned by a fan, and the "stunt" car is on display at the Star Cars Museum in Tennessee.

The show was critically lambasted, and led NBC to become something of a laughingstock for green-lighting it in the first place. The ratings were horrid across the board, save for viewers in the younger demographics who were more inclined to watch something fun and silly than the two serious dramas competing in the timeslot. (While that might actually be enough to keep a modern show on the air, in those days the networks only looked at total viewership numbers in deciding which shows to renew. Also, most households at the time only owned one TV set and parents were generally the ones who decided what to watch, limiting the potential audience further.)

Despite this, NBC left the show on for its entire 30-episode season, probably to burn off the episodes and recoup some sort of investment (a common tactic in television). It should be noted that James L. Brooks, now well known as a film director and as one of the executive producers of The Simpsons, worked on this show as a writer. His disdain for the series allowed The Simpsons to poke fun at it a few times.

My Mother the Car is considered by many people to be one of the worst television series ever made. However, to people who have deemed it So Okay, It's Average, there are other shows much worthier of that title. Still, despite—or perhaps because of—its reputation, it has enough of a cult following to have gotten a complete release on DVD. It has also aired on Antenna TV, and you can find episodes (including the pilot) on YouTube.