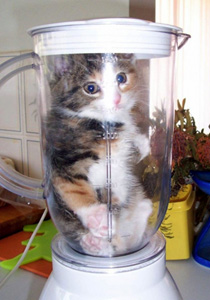 If this appliance is really evil, it will blend this kitten.

Sometimes the threat in a horror movie isn't a psycho killer or otherworldly monster. Sometimes our own technology becomes the threat. Through some unseen influence (demonic possession, AIs gone rogue, a new kind of virus, what have you) the machines we take for granted to make our lives easier conspire to make our lives shorter.

Now there are plenty of machines in the world that can do horrific things to the human body if they get a hold of one. Industrial machinery has been notorious for this, bringing about OSHA. Machines of war exist to do this deliberately. But these machines aren't the threat in horror films.

Horror films will take the benign technology that surrounds us and ramp up their power to impossible levels to give the threat of gruesome death from everyday objects. Cell phones will cook the brains of unsuspecting users. Tanning beds will cremate their occupants. Ceiling fans will decapitate those who even look at them wrong. And don't even get started on the Robot Meter Maids.

In Real Life, years of oversight by consumer protection agencies have made the majority of our tech relatively safe against all but the most idiotic abuse. Those things that do prove dangerous can expect a visit from hordes of ravening lawyers wielding class action suits. For actual contraptions designed to kill, see Death Trap tropes.

When the machine itself is the whole threat, rather than just a tool of a greater danger, it's a subtrope of Attack of the Killer Whatever.

If it's competent enough at killing things, it can qualify as a Mechanical Monster.

See also: Vengeful Vending Machine, Killer Robot, Made of Plasticine, Robot War, A.I. Is a Crapshoot, Turned Against Their Masters.