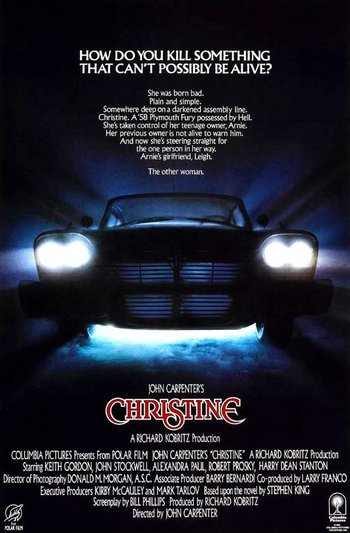 She was born bad. Plain and simple.
"She had the smell of a brand new car, and that's just about the finest smell in the world, except maybe for pussy."
—Roland D. LeBay to Arnie Cunningham, regarding the worst auto purchase in history. For both of them.
Advertisement:

Christine is a 1983 horror novel by Stephen King.

The basic premise is that Arnie Cunningham, the most unpopular guy in his suburban Pittsburgh high school in 1978, buys his first car, much like any other teenager the world over. The problem is that his car — a 1958 Plymouth Fury — is not only sentient but extremely and psychotically in love with him. The novel details Arnie's transition from normal, if nerdy and unhappy, teenager into a somewhat popular greaser loner, and eventually into a lonely psychotic as the car and the ghost of its previous owner begin to exert an ever-increasing amount of control over him.

A film adaptation, directed by John Carpenter and starring Keith Gordon as Arnie, Alexandra Paul as Leigh and John Stockwell as Dennis was released the same year the book was published.