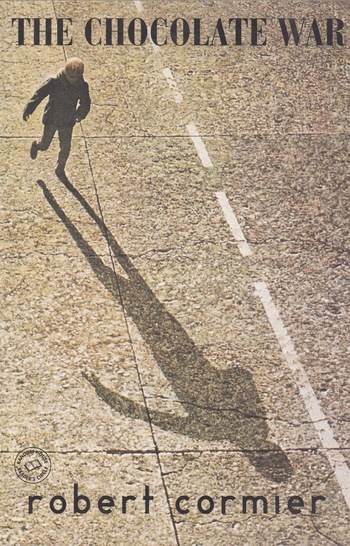 "Do I dare disturb the universe?"
Advertisement:

At an all-boys Catholic School of Horrors called Trinity, a secret club known as the "Vigils" controls everything, with its members abusing their power for their own personal amusement. Brother Leon, a corrupt teacher who's trying to replace the current headmaster, makes a deal with them—if they can double the number of chocolates sold at the annual fundraiser, and he gets promoted because of the fundraiser's success, he'll give them unofficial backing and even more power. But what nobody's expecting is that one Ordinary High-School Student, Jerry Renault, will rebel and try to sabotage the club's power.

If you read a lot of young adult literature, you probably have one guess where this is headed. If you've read other books by Robert Cormier, you're more likely to have the correct guess—and also a good idea of why this novel shows up so often on banned-books lists.

This book was followed by an even more depressing 1985 sequel, Beyond the Chocolate War. Jerry is Demoted to Extra and transferred to a public school due to the cruelty of the Vigils, while Obie, the only sympathetic Vigil, takes over as protagonist in his attempts to take down Archie.

A movie of the first book was made in 1988, directed by Keith Gordon and starring John Glover as Brother Leon. However, it has been strongly criticized for its changes to the book's ending, as the movie gives the story a more happy ending.