Film / Chloe in the Afternoon 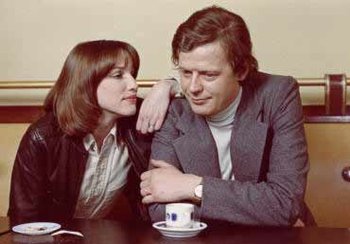 Chloe in the Afternoon (French: L’Amour l’apres-midi, "Love in the Afternoon", which has also been used for English-language releases) is a 1972 film written and directed by Éric Rohmer, the final one of his Six Moral Tales.

Frédéric (Bernard Verley), a white collar junior executive in Paris, is married to Hélène (Françoise Verley, Bernard's wife), a teacher. They already have one child and she's pregnant again. Frédéric claims that he's happy with his marriage, but he also can't resist looking at other women, which he justifies by saying that he sees them as reflections of Hélène. He's also prone to fantasies, such as one where he wears a medallion that breaks down the free will of women he encounters.

But out of nowhere, Chloe (Zouzou) shows up at his office. She's the ex-girlfriend of one of his old friends, whose life ended up in a mess because of her. Initially wary of Chloe and only tolerating her out of sympathy, Frédéric gradually warms up to her and she becomes the other woman in his life, though they agree to steer away from any idea of sex. But as his second child is born, Frédéric finds himself more conflicted over the woman he has a duty toward (Hélène) versus the woman he feels passion for (Chloe). The story comes to a crossroads when Chloe asks Frédéric to father her child.

If that plot sounds familiar, it might be because Chris Rock used it as the basis for his 2007 film I Think I Love My Wife.

No connection to the 1957 film Love in the Afternoon.