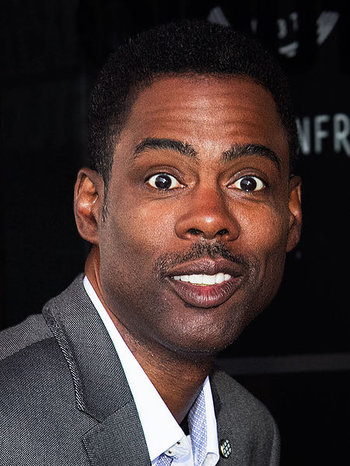 "Comedy is the blues for people who can't sing."
Advertisement:

Christopher Julius "Chris" Rock III (born February 7, 1965) is a stand-up comedian, actor and producer. He is generally considered to be the successor to Richard Pryor as the most prominent black comedic actor and comedian.

He got his break on Saturday Night Live in 1990 and left in 1993 (in protest over the lack of good roles on the show, though he had a memorable recurring character [militant black talk show host Nat X] and did do his share of celebrity impressions, like Arsenio Hall, Flava Flav, MC Hammer, Whoopi Goldberg, Michael Jackson, Luther Campbell, and porn star Long Dong Silver) and became a frequent guest star (not a cast member, as some sources will tell you) on In Living Color! during its lackluster final season as his character Cheap Pete from I'm Gonna Git You Sucka.

Rock really broke into the mainstream with his second HBO stand-up special Bring the Pain in 1996, in particular with his controversial routine therein assessing the state of black America: "Black People vs. Niggas". This led to the successful late night comedy talk show The Chris Rock Show, which aired on HBO from 1997-2000. Several more acclaimed stand-up tours have followed, as have numerous film roles in both live-action and animation (Madagascar, Osmosis Jones, Fargo) and a sitcom based on his childhood. He also wrote the story for, executive produced, and starred in Spiral, the ninth entry in the Saw series.