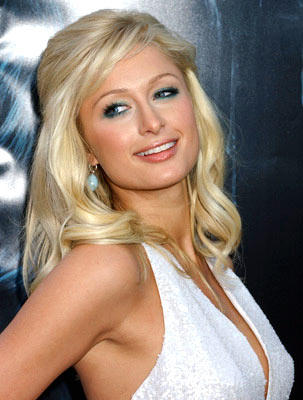 "Dress cute wherever you go, life is too short to blend in."
Advertisement:

Paris Whitney Hilton (born February 17, 1981 in New York City, New York) is... well, that's the thing. How did she become famous? Hell, what is it precisely that she's famous for in the first place? Seeing as how she served as the model for the modern ideal of the "celebutante", those are questions that beg to be answered.

Paris was born into the multi-billionaire Hilton family, owners of the hotel chain bearing their name. She was, by all accounts, fairly troublesome in her youth, spending a year at a residential school for "troubled teens" in Utah and getting kicked out of a Connecticut boarding school before dropping out of high school altogether and getting a GED. Afterward, she became a fairly standard model/socialite/"it girl", serving as a regular fixture of tabloids and the New York nightclub scene. In 2003, Fox approached her to star on a reality show called The Simple Life, in which she and another big-city socialite (they eventually decided on Nicole Richie, adopted daughter of Lionel) would be sent to live on a farm in Arkansas where hijinks would presumably ensue. The two accepted.

And then came the tape. You know which one.

The scandal that erupted from Paris's sex tape (retroactively known as 1 Night in Paris) turned her into an overnight celebrity and The Simple Life into a smash hit for Fox. She leveraged that fame to appear in a whole slew of films and TV shows, many of which either went Direct to Video or were small cameos (apart from House of Wax (2005), Repo! The Genetic Opera, and The Hottie & the Nottie), as well as record an album, create several reality shows, and write a bestselling, tongue-in-cheek autobiography. When she wasn't working, she was frequently running afoul of the law, most often for reckless driving of very expensive cars (often while inebriated) and for carrying and using drugs. Her list of arrests and fines is too long to list here, so go check elsewhere if you care about that.

Between her behavior and the auspicious beginnings of her career as a celebrity, Paris earned a many detractors, frequently topping lists of the most disliked celebrities in America for much of the mid-late '00s. Most people wondered just how it was possible for a person to become a media fixture as big as Paris merely by appearing on a single reality show and making a single sex tape, and the fact that Paris was seemingly only the first of many such celebutantes to take this route to fame made them fear for the future of popular culture. Of course, the phenomenon of being "Famous for Being Famous" is a bit older than people realize — the term "celebutante" was coined as far back as 1939, and many of the "Warhol Superstars" of The '70s fit the bill as well as any Kardashian. Plus, at the very least she seems to be fully aware of how she got famous. But then again, none of the celebutantes of days past ever reached anything close to the level of media saturation as Paris Hilton and those who followed in her footsteps. Does her success say something about the state of our society? If so, what?

Needless to say, Paris Hilton is a very controversial figure.

As far as what she has actually done and ventured into, includes everything from perfumery, music, acting, authoring, to Reality TV.