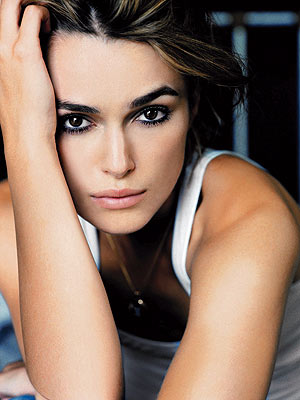 "Apparently on the Internet I'm a tomboy beanpole? I can't use a computer, so maybe I'm a bit out of the loop. I don't know whether to be flattered or not flattered. The beanpole bit, is that good? Can you be a sexy beanpole?"
Advertisement:

Keira Christina Knightley OBE (born March 26, 1985) is a British actress who became subject to international recognition for her roles in Bend It Like Beckham (2002) and Pirates of the Caribbean (2003), followed by two sequels. She has since starred in a number of feature films, theater productions, and modeling campaigns.

Knightley's first role was in Star Wars: The Phantom Menace playing Padme Amidala's handmaiden decoy Sabé. It also helped that she has a strong resemblance to Natalie Portman.

Knightley oftentimes stars in period pieces playing a young woman approaching adulthood, usually the Spirited Young Lady or Rebellious Princess. She married James Righton of the London-based band Klaxons in May 2013, and gave birth to their first child, a daughter named Edie, in 2015. They had another daughter named Delilah in 2019.