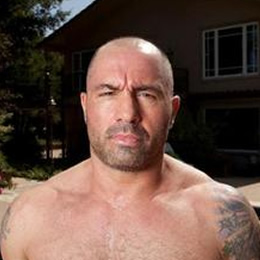 Joseph James Rogan (born August 11, 1967) is a stand-up comedian, actor, sports commentator, game show host, and podcaster. Getting his start in the stand up circuit in the Boston area in the late '80s, Joe eventually found his way to Hollywood. After a starring in a few failed pilots (that Joe himself describes as awful), he found his first big success in NewsRadio on NBC, playing Joe Garelli.

Soon, Joe would find other projects while his stand-up career also blossomed. A lifelong martial arts practitioner and aficionado, he was a huge fan of the emerging sport of Mixed Martial Arts and got a job as a backstage interviewer for the UFC, eventually moving to the color commentator position alongside Mike Goldberg, although due to the expansion of the UFC and the amount of shows they now put on and his own crazy schedule, now only does the pay-per-views and the FOX shows. But he's probably most famous for being the host of the Fear Factor game show on NBC, which he has partial ownership of (and hosted a one-season revival in 2012). He also hosted the much derided last season of The Man Show with Doug Stanhope. He had his own show on Syfy, Joe Rogan Questions Everything, a show delving into conspiracies and the unknown, with a unique neutral take on the subject, mixing optimistic excitement with leveled skepticism. So far it has only aired one season.

Joe started a podcast on his website near the start of the podcast boom; it was originally updated on a weekly basis but over time expanded to five days a week on YouTube, iTunes, etc. to become one of the most popular podcasts in the world. This was due to interviewing everyone from close friends in the MMA world, conspiracy theorists and stand-up comedians to big name actors, directors, writers, scientists, academics and politicians. Many of his stand-up specials have aired on Comedy Central and Netflix.