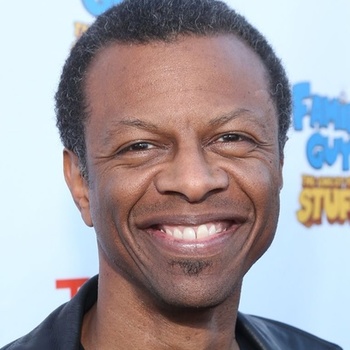 "So, what's your favorite performance in a cartoon, or video game?"
"Phil LaMarr, as everyone ever."
Advertisement:

One of the original cast members on the sketch comedy series MADtv (along with fellow voice actors, David Herman and Nicole Sullivannote Alex Borstein and Andrew Bowen are other MADtv cast members-turned-voice actors — Borstein plays Lois and her mother Babs on Family Guy and Bowen plays Johnny Cage in Mortal Kombat X and Mortal Kombat 11 — but Borstein was a part of the second wave of cast members brought in on the show during its third season while Bowen was only involved in the fourth season), Phillip LaMarr (born January 24, 1967 in Los Angeles, California) is also known for his voice acting on the animated series Futurama as Hermes Conrad and about a million minor recurring characters and background voices, Static Shock as Virgil "Static" Hawkins, the title character of Samurai Jack, Hector Con Carne in Evil Con Carne, Judge Brown and Blaccu-Weather meteorologist Ollie Williams in Family Guy, Green Lantern John Stewart in Justice League and Justice League Unlimited, Wilt in Foster's Home for Imaginary Friends, Carver Descartes in The Weekenders, Reddas in Final Fantasy XII, Jazz in Transformers: Animated, and Vamp in Metal Gear Solid 2 & 4. And according to one source "Evil Barack Obama" in Make My Video C+C Music Factory. He replaced Chris Rock's role, Osmosis Jones, from the film for the short-lived television series Ozzy & Drix. He also had a minor role in Pulp Fiction, playing the character who was the Trope Namer for I Just Shot Marvin in the Face. As well as one of the commentators during the final fight in Real Steel.

He has a very versatile voice range. His range can be shown in Jak and Daxter, where he voices both secondary and minor characters.

On MADtv, his most popular recurring characters included Desperation Lee (a Dirty Old Man who hosted a 1970s public access show called Funky Walker, Dirty Talker), Jaq (an over-enthusiastic delivery man for UPS expy UBS with a surfer dude accent), Savante (an R&B singer with more sex appeal than talent), and Rick (a Casanova Wannabe). His celebrity impressions on the show included Princenote known throughout his run on the show as "The Artist Formerly Known As Prince", which more than one parody poked fun at, Moe Howard (on a Three Stooges parody that had Moe, Larry, and Curly as drug-dealing gangstersnote Larry and Curly were played by Debra Wilson and Orlando Jones, respectively), Spike Lee, Chris Rock, Sherman Hemsley (as George Jefferson from The Jeffersons), Sammy Davis Jr., Bill Maher (in so much white make-up that no one knew it was him), Billy Crystal (also in so much white make-up that it was impossible to tell it was him)note coincidentally, Billy Crystal himself was on Saturday Night Live, playing Sammy Davis Jr., in so much black make-up that it was impossible to tell it was him, Chris Tucker, Michael Jackson, and Louis Farrakhan.