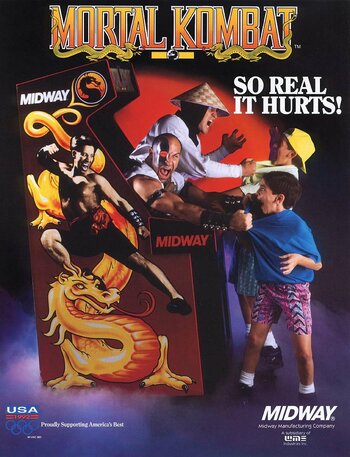 A 2000 year old half human, half dragon, Goro has remained undefeated for the last 500 years. He won the title of Grand Champion by defeating Kung Lao, a Shaolin fighting monk. It was during this period that the tournament fell into Shang Tsung's hands and was corrupted.
— The game's Attract Mode story screen.
Advertisement:

Mortal Kombat is a Fighting Game released in arcades in 1992; it was later ported to the Genesis and Super NES, amongst other gaming platforms. It is the first instalment in the Mortal Kombat franchise.

The basic storyline of the game was similar to other fighting games at the time: Mortal Kombat is a Shaolin martial arts tournament which has been corrupted by its grandmaster. The kompetitors in this tournament—Liu Kang, a Shaolin monk; Johnny Cage, a Hollywood action film star; Sonya Blade, an United States Special Forces agent; Kano, a mercenary/killer-for-hire; Raiden, the God of Thunder; Scorpion, the reborn spectre of a murdered ninja; and Sub-Zero, an assassin for the Lin Kuei ninja clan—will fight each other for the right to face the grandmaster, Evil Sorcerer Shang Tsung, and his champion Goro for the title of Mortal Kombat's champion.

Mortal Kombat is known for being one of the most famous games to use digitized actors (the first was Pit-Fighter). The game also stood out at the time of its release due to the (semi-)realistic depictions of blood and violence—especially with its infamous Fatalities. This is the only game in the series to use a score system. It also featured an Easter Egg in the form of a "bonus" battle: by meeting certain requirements, a player could face Reptile, a Palette Swap of Scorpion and Sub-Zero who uses a mix of both their powers.