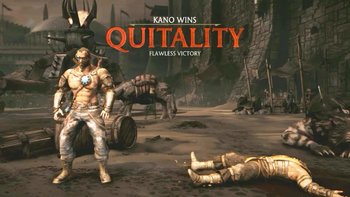 What happens when you quit an online match? Your opponent gets to watch Your Head A-Splode.
Your previous online play session didn't end naturally, which is PREEEEETTY suspicious. If this keeps happening, we're gonna have to block you from playing online for a while. Make sure your Internet isn't busted and try again.
— Splatoon 2 ragequit warning
Advertisement:

Anyone who's ever played an online multiplayer game has encountered the Rage Quit. Maybe they're mad that they're losing. Maybe they don't like the game. Or maybe they're just a griefer. Either way, rage quitting disrupts the flow of the game and annoys the other player(s)—especially if the game ends because of it. And if a game accumulates a large number of rage quitters, then legitimate players may eventually leave the game (or at least its multiplayer mode) out of frustration due to never being able to actually finish a match.

Many game developers have taken notice of this and implemented ways to minimize the effect of rage quitting; in games that require a set number of people, players who leave early may be replaced by bots of varying skill. Another way is to introduce mechanics specifically tailored to discourage quitting in the middle of a game. This usually comes in one of two forms (though they may be combined):