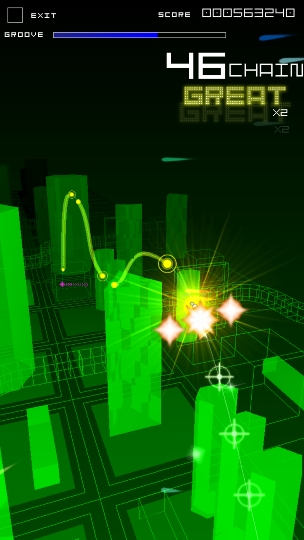 Roller coaster rhythm action!note If the background looks familiar: The song is a remix of "Geometric City".
"Welcome to Groove Coaster!"
—Linka, the mascot for Groove Coaster 3: Link Fever
Advertisement:

Groove Coaster (marketed as Rhythmvaders in some countries) is a Rhythm Game series developed by Matrix Software and published by Taito, for iOS, Android, and arcades. Officially, it is a spinoff of Space Invaders, which is why copyright notices for the game include the year 1978, the year SI was released.

The premise of the game is as follows: You have an Avatar that travels down a fixed path, along which various kinds of notes will appear. There are ten kinds of notes, each of which requires different kinds of interactions with the touchscreen in the iOS version and the two Booster controllers in the arcade version. Most notes are as simple as touching the touchscreen or either Booster button, but other notes require actions such as rapidly tapping the buttons or touchscreen, rubbing either Booster or the touchscreen back and forth, or pressing both Boosters or the touchscreen with two fingers at the same time. Hitting notes well will give you points and fill up the Groove gauge, while missing or poorly timing notes will take away from the gauge; you need to finish the song with 70% Groove gauge or higher to clear it.

The music selection is a mix of songs from past Taito games as well as original Taito songs, both varieties of which are composed by Taito's in-house music group Zuntata, as well as Vocaloid songs, Taito songs arranged by third-party musicians, and doujin music. The arcade version adds a variety of licensed songs, such as arranges of Touhou Project songs.

Groove Coaster has had eight installents so far, four for consumer platforms and four for arcades:

Perfect?! That was incredible!
You set a new record!