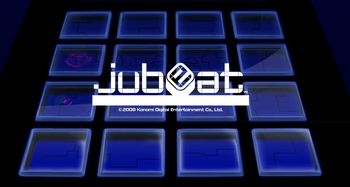 jubeat (which, for the record, is actually pronounced u-beat, not Jew-beat) is one of the newer members of the BEMANI family of Rhythm Games produced by Konami. In this game, you simply hit buttons (which are transparent and overlaid atop a monitor, it's not a touch screen as some people think) on a square 4x4 grid to a chosen song when the indicators tell you to do so. In short, it's musical Whack-A-Mole. As is the case in other Bemani games, it looks easy, but can get fairly difficult once you get up to the harder difficulties and songs.

jubeat has proven quite popular since its 2008 launch, gaining sequels and becoming a mainstay in the BEMANI lineup. There's also an iOS port, jubeat plus, which had been supported by DLC. Impressively, it's also gotten an international release as Jukebeat (which has its own DLC packs as well, but with more American music, of course). jubeat plus was later abandoned, but Konami later announced on April 1, 2021 that it would relaunch the mobile version with a major update that will switch to a free-to-play model.