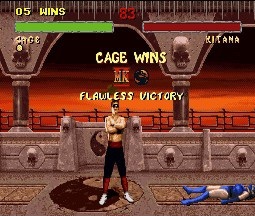 In Fighting Games, if you manage to defeat an opponent without taking any damage yourself, you'll get a caption to appear on the screen, acknowledging your awesomeness.

Games that bother with points will usually give you points for it, but it's not necessary. It's something of a Bragging Rights Reward.

In Fighting Games that have you scoring points for finishing a round, earning a Flawless Victory earns you the most points, and may be a requirement for a bonus boss fight.

Cherry Tapping can make the victory both flawless and humiliating. See No Casualties Run for the strategy game equivalent. A No-Damage Run is a Self-Imposed Challenge where you don't take damage, whether the game acknowledges it or not.