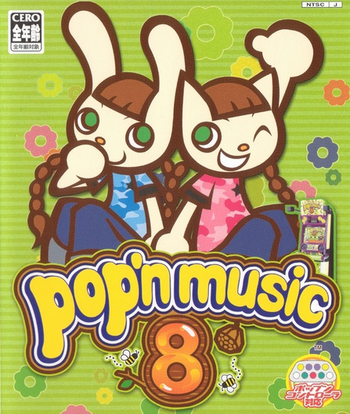 pop'n music is a game series in Konami's BEMANI lineup of Rhythm Games, developed as a Lighter and Softer version of beatmania, another Bemani title.
Advertisement:

Like beatmania, notes come down the screen and the object is to "hit" the notes by pressing their corresponding buttons. Hitting notes will play parts of the music, while missing notes will make the music sound not like what it's supposed to be. Instead of 5-7 rectangular keys and a turntable like beatmania, pop'n uses nine big colorful buttons, requiring you to use your whole hands instead of individual fingers. Also unlike most rhythm games, pop'n forgoes having a music video for each song, instead pitting your chosen character against the character associated with the song you're playing, with separate animations for hitting or missing notes, and passing or failing a song.

pop'n uses a cute, colorful interface to appeal to younger players, but don't let that deceive you; pop'n is just as hard as other Bemani series, with songs requiring you to hit as many as 1,000 notes in the span of two minutes.

The Simple, yet Awesome core gameplay of pop'n and its ever-escalating challenge for veteran players has allowed the series to become successful with Rhythm Game fans, helped by a wide variety of songs to play and a massive boatload of cute and colorful characters. Having first launched in 1998, Konami continues to release new versions and updates, with many updates providing new songs and characters to unlock and new versions providing major game updates and new interface styles.

Sadly, while the series has enjoyed considerable success in Japan, it hasn't done so well overseas, partly because only one arcade version was ever officially released worldwide and only two consumer versions have had overseas releases.

Currently, the series is up to 26 main arcade installments, along with consoles releases and spin-off releases such as pop'n stage (which plays more like DanceDanceRevolution), pop'n music Animelo, pop'n music Best Hits and Hello! Pop'n Music.

Advertisement:
Games in the pop'n music series:
All entries are arcade releases unless otherwise noted.

Like most other Bemani series, pop'n music suffers from serious No Export for You-itis. The only games in the series that were released outside of Japan are an extremely rare US version of pop'n music 1, Beat'n Groovy, an XBLA release that many players regarded as being completely awful, and a Wii adaptation (released in Japan, the U.S., and Europe, although renamed in the latter as pop'n rhythm) that swapped out the physical controller for notes triggered with motion gestures (presented on-screen as the character hitting one of five buttons). In the U.S., Konami also tested a pop'n music redemption game based on the Wii version, using a simplified control scheme with four buttons in a row for each player, but it was quietly shelved and repackaged for Japan as the Spin-Off game HELLO! POP'N MUSIC.

As a result, the arcade version is very rare outside of Japan. If you want to play at home, you could buy the official controller for a more affordable experience, but the controller has much smaller buttons, so you might as well play beatmania IIDX. The other way is to spend a few hundred bucks on an arcade-sized controller. New arcade-sized controllers sell for at least $200; one such controller is more expensive than an entire Rock Band set. And this is all without the game or means to play the game on a PS2.

Note: Unless otherwise stated, all difficulty levels on this page use the 1-50 scale. To convert from the old 1-43 scale to new scale, simply add 6.

Okay! Here we go! Are you ready?

You were perfect!
Feedback