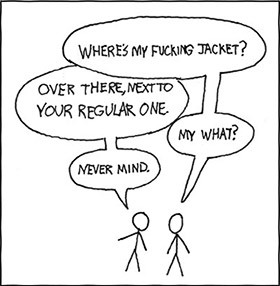 Right next to the elephant he shot in his pajamas.
Wesley: I'm a rogue demon hunter now.
Cordelia: Wow... so, what's a rogue demon?
— Angel, "Parting Gifts"
Advertisement:

A simple statement becomes a bit of wordplay caused by an unclear modifier. This is also known as a "syntactic ambiguity"

This typically occurs through the use of multiple nouns, verbs, adjectives, etc., in the same sentence, in such a way that it's difficult or even impossible to determine which adjective, verb, etc, applies to each noun. As a result, it's possible to interpret the sentence as having two or more meanings which are sufficiently different that the difference could potentially be very important to the reader or the plot. In some cases, there is only one technically, grammatically, or logically correct interpretation, but it's so easy to misinterpret or mis-write that most people end up getting it wrong at first. In other cases, multiple interpretations are arguably grammatically correct.

In both Real Life and fiction, this is usually Played for Laughs, because the incorrect interpretation typically leads to an absurdity. A "man eating chicken" (note missing hyphen) seems to be an especially popular variant. Legend sometimes attributes the origin of this one to notorious Hoaxer P.T. Barnum, but it's unclear what the actual origin is.

Another popular comedic variant is: "You see this object here? When I nod my head, hit it as hard as you can."

Yet another common variant: A cries, "X!" referring to seeing an X approaching, but B interprets it as the answer to his preceding rhetorical question.

If someone catches on to the ambiguous syntax and asks for clarification on whether the object being referred to is X or Y, it's not uncommon to be met with "Yes".

On a more serious note, however, ambiguous syntax is sometimes used in false advertising so that the advertiser can claim they explained everything, and it was the consumer's fault for misinterpreting the statement. Likewise, in myth and legend, prophecies often includes ambiguous syntax, to make it more difficult to determine the exact details of a predicted event until it actually occurs. It is especially abused by the Literal Genie, to grant a wish in a way not intended by the speaker.

This can easily happen in English, where there is a lot more room for ambiguity due to lack of case marking and grammatical gender (languages with one of those usually require adjectives and nouns to agree on gender and case, so you know a feminine adjective couldn't refer to a masculine noun). It's also awfully common in Latin (ironically a language with case marking AND genders) due to the freer word order.

Subtrope to Double Meaning. Compare Wanton Cruelty to the Common Comma, Prophecy Twist, False Reassurance, Exact Words, Confusing Multiple Negatives, I Know You Know I Know, Who's on First?, and That Came Out Wrong. For issues caused by spacing rather than syntax, see The Problem with Pen Island. If the statement's ambiguity is clarified in text, see Punctuation Changes the Meaning.

(It's still a Game-Breaker, but for different reasons.)