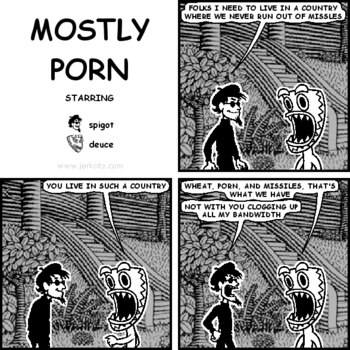 One of the more comprehensible strips.
"Slurping and drooling and hurr."
The comic's unofficial motto
Advertisement:

in 2018) is a Long Runner of a webcomic, starting in August 17, 1998 with strips coming out almost every day after that. It follows the adventures of Pants the "christmas tree monster", Spigot the beatnik, and Deuce the tiki. The story is essentially non-existent, with much of the dialogue coming from real IRC chat logs rather then being written specifically for the comic. That being said, the majority of strips feature the three (plus some other minor characters) Having a Gay Old Time.

NOTE: Not Safe for Work