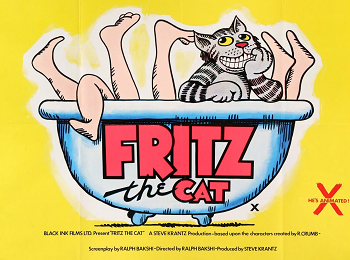 Ralph Bakshi's directorial debut, this 1972 feature film adaptation of Robert Crumb's comic strip Fritz the Cat is famous for being the first feature-length adult animated film in the United States, receiving an X rating upon its original release.note Equivalent to today's NC-17, though all home media re-releases go unrated due to stigma around the aforementioned rating. It streamlines three plotlines from the comic into a linear story, with more political and social commentary than what had previously been largely light entertainment.

The film follows the adventures of a sex-crazed cat named Fritz who, after deciding he's had enough of the college life, drops out and roams New York City (later taking a roadtrip to San Francisco) in The '60s, ostensibly looking for a cause to join in, all the while anything that could go wrong does.

Over the course of the story, Fritz spends time with stoners, talks to black people (represented by crows) in Harlem where he meets Duke, very briefly meets with some Rabbis, goes on a road trip with his girlfriend Winston Schwartz, and ultimately meets up with extremists who scheme to blow up a power plant. Unsurprisingly, he spends most of the movie running from the police (represented as, of course, pigs). Of course, his goal of finding himself always seems to take a back seat to more immediate gratification in the form of either carnal pleasures or good ol' fashioned weed.

Having previously helmed several TV shows, Bakshi came across a Fritz comic in a Manhattan book store and went straight to author R. Crumb to ask for the rights to turn the comic into a film. Although Crumb gave Bakshi a sketchbook of his to help him learn to draw Fritz, he was highly doubtful of the film's potential for success, and never agreed to sign over the rights to greenlight the film. Producer Steve Krantz, however, struck a deal with Crumb's wife, allowing the film to begin production; Crumb was paid $50,000 for the film rights. Despite its limited release, it gained favorable critical response and great commercial success, remaining one of the most highest grossing independent films of all time. This enabled a sequel to be produced in 1974, The Nine Lives of Fritz the Cat.

Although aired in 1080p on HDTV and MGM's streaming service in 2017, it has never been released on Blu-ray and the 2002 SD DVD edition is out of print.note A copy on Amazon is USD$65. As of 2021, it's available to stream on Prime Video and is scheduled to be released on Blu-ray (along with a separate Blu-ray release of the sequel) in October.

Get the fuck off my car!

When Fritz is preaching for revolt on top of the car in Harlem, someone in the crowd yells "Get the fuck off my car!"

Get the fuck off my car!

When Fritz is preaching for revolt on top of the car in Harlem, someone in the crowd yells "Get the fuck off my car!"