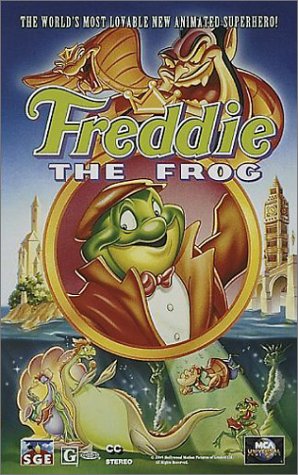 Freddie as F.R.O.7 (Known in the United States as Freddie the Frog) was a... strange children's film produced in the UK in 1992.

The basic plot: A young French prince (who, by the way, is also a wizard) is turned into a frog by his evil aunt. Then he grows into a human-sized, anthropomorphic frog. Then he becomes a secret agent.

Then things get weird.

The original and unedited UK version is now available on YouTube, here

. The American cut is reviewed here

The chief differences between the UK and the US version is that in the US version, there was an attempt to make the plot more streamlined, although they also removed quite a bit of dialogue that makes the film a least a little easier to follow. It also removes some strange sexual innuendo.