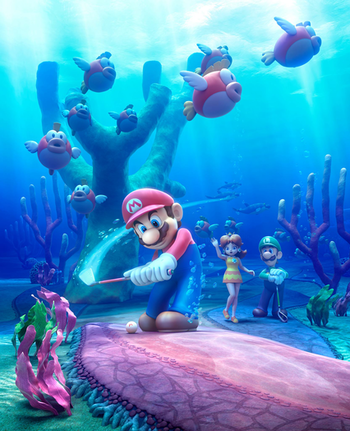 "Mario, the ball landed in the water hazard. You'll have to take the penalty stroke."
"Nope, playing through."
Max: Hey! Hang on a second! We don't have gills!
Sam: It's a cartoon, jarhead. We have remarkable lung-capacity!
— The Adventures of Sam & Max: Freelance Police
Advertisement:

Humans can't breathe underwater. We can hold our breath for a short time, some of us longer than others. Longer than two minutes (without training to hold your breath beforehand) usually results in unconsciousness (and you'll automatically start to breathe again, which is very bad if your head is underwater). The world record with training is 22 minutes, but anything significantly more than that would push the body to its breaking point.

This seems not to be the case with some Video Game characters, however, who can swim underwater for infinite amounts of time and show absolutely no signs of discomfort. This incredible feat is never ever explained, or even mentioned as something out of the ordinary in these games.

Sometimes, the character gets a diving mask equipped with only a snorkel and absolutely no oxygen containers. While in the real world, this equipment would allow you to swim only a small depth under the surface of the water, in the games following this trope, it lets you plunge boldly into the deepest oceanic depths.

The most unsettling part, if you think about it, is the imagery often accompanying this trope: once in a while tiny air bubbles escape from your character's mouth and happily go speeding towards the surface. In the real world, it would mean that what little oxygen is still left in your character's lungs is gradually depleting, leading to an impending drowning.

This trope was mostly used in underwater levels of pre-8-bit and early 8-bit Platform Games. Due to programming limits it was easier to either invoke this trope, or just give the character Super Drowning Skills. In the late 8-bit era, many games implemented a revolutionary aversion of this trope, namely the Oxygen Meter. Still, this trope continues to be used in Video Games time after time up to the present day, and is even sometimes encountered in other media.

Super Not Drowning Skills is a Sub-Trope of Acceptable Breaks from Reality. It seems to be the opposite of Super Drowning Skills; however, they both can be present in different levels of the same game.

Not to be confused with any characters who have the supernatural ability to breathe underwater, sometimes resulting in Water Is Air. Super Not Drowning Skills happens when characters don't (or are very unlikely to) have this ability, but can survive underwater for an indefinite time anyway.

Compare with Super Swimming Skills. Characters with these abilities are particularly prone to Symbolic Serene Submersion. For the same trope, but IN SPACE, see Batman Can Breathe in Space. For similar extraordinary skills of surviving in ice, see Harmless Freezing. See also Artificial Gill, The Needless. A person may be using a Reed Snorkel.

The following examples could be explained considering the character's traits or the game world mechanics or some other facts. But that explanation was never actually done by the game authors themselves. Is this trope played straight in these examples, is it handwaved or justified? Maybe we'll never know.
open/close all folders
Action-Adventure
Beat 'em Up
MMORPG
Platform Game
Real-Time Strategy
Role-Playing Game
Visual Novels
Wide-Open Sandbox

There's not going to be any litter in Crystal Lake while Camp Counselor Jason can say anything about it!

There's not going to be any litter in Crystal Lake while Camp Counselor Jason can say anything about it!