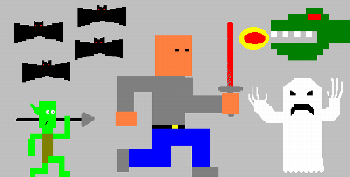 "Adventure Dennis is a stunning juggernaut of righteous fury and he will persevere!"

Adventure Dennis Saves The Mayor is an obscure webcomic about a man, titular Adventure Dennis, on a mission to save the kidnapped mayor. He finds a magic sword and progresses through ten "levels" in the style of an old school Platform Game killing anything that opposes him, or even just happens to be standing in his way. The comic was drawn in MS Paint with much copying and pasting.

It can be found on the Book Of PDR, over here