Your Princess Is in Another Castle! 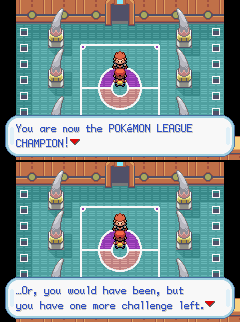 "Son of a Bi--!!"
"THIS ROOM IS AN ILLUSION AND IS A TRAP DEVISUT BY SATAN.
GO AHEAD DAUNTLESSLY! MAKE RAPID PROGRES!"
(Player is then forced to replay the whole game, on a time limit)note Yes, it really is spelled like that.
— Ghosts 'n Goblins

The plot has been resolved... but the work isn't actually over yet. Before long, there's a twist thrown in. Alternately the plot looks all resolved, and we've almost reached the end, so it actually seems like everything's working out... but then the writers pull a Cliffhanger situation to finish everything off.

In terms of providing a genuine surprise, the trope works to varying degrees in different media, from being nearly unusable in books (the reader can tell how much is left by page count, but unexpected sequels can occasionally catch one by surprise) to completely effective in single-media computer games, particularly RPGs. For some reason, there has been a trend of including a segment which transparently pretends to be the climax or endgame when it obviously isn't, not just because there are vast expanses of the map you haven't explored yet or plot threads that haven't been tied up yet, but because you're still on Disc 1 of 4. Expect to see The Man Behind the Man make his first appearance, perhaps offing the guy you thought was the Big Bad, as well as a Climax Boss or two and maybe a traitor. The heroes may find that a minor crime has revealed a major plot.

When done at the end of a movie, it is used as a tease for a sequel. Of course, that could depend on whether the movie is good/successful enough to warrant a sequel. A Sequel Reset or Happy Ending Override often invalidates previous accomplishments of the hero.

In Crime and Punishment Series, this trope usually results in the detained suspect being Acquitted Too Late. In RPGs, this often takes the form of a Disc-One Final Dungeon. See also Snicket Warning Label, Nice Job Breaking It, Hero!, "Shaggy Dog" Story and Hope Spot. Closely related to You Can't Thwart Stage One and Heads I Win, Tails You Lose; may also overlap with Failure Is the Only Option.

Derives its name from Super Mario Bros., where after all but the final castle level, a rescued Toad thanks Mario but tells him "Our Princess is in Another Castle."

As an Ending Trope (or at least a Reveal Trope), all spoilers on this page are unmarked.

Alternative Title(s): False Ending, Our Princess Is In Another Castle, Not So Fast Bucko