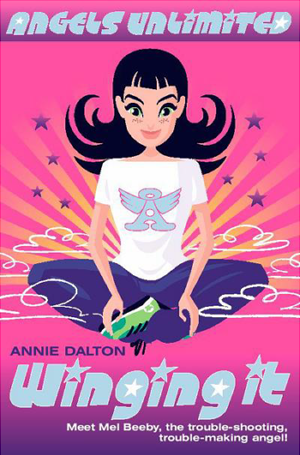 Angels Unlimited is the title of a series of novels written for young adults by Annie Dalton. The books are based around Melanie Beeby, who is killed in a traffic accident on the day after her thirteenth birthday. She then finds herself transported to Heaven. The Heaven of this universe is a lively and vibrant city, populated both by dead humans-turned-angels and Heaven-born beings known as pure angels. This city is also where the headquarters of the Agency are situated. The Agency is an elite group whose job is to counter the Opposition, informally known as the PODs or Powers Of Darkness - the polar opposite of the Agency.

Upon arrival, Mel discovers that she is to be a trainee at the Angel Academy.

Each book features time travel of some kind, where Mel is tasked by the Agency to unravel various celestial problems involving humans and the Opposition. As of July 1, 2008 there are twelve novels and three omnibus books. On May 5, 2005, the Angels Unlimited series was renamed the Agent Angel series, and new covers were released for each book. The series has also been published under the title Angel Academy, with new covers.

The books are as follows:

Winging It - Mel is knocked down by a car the day after her thirteenth birthday and has to adjust to a new "life" in Heaven as a student at the Angel Academy.

Losing The Plot - Mel and her friends end up in Elizabethan London, watching over three teenagers.

Flying High - Mel and her friends get mixed up in a time-travel scam involving an old enemy of Mel's, proving that there's more to him than she thought...

Calling The Shots - Mel is sent on her first guardian angel mission, looking after a 1920s American girl who's tuned into a toxic vibes wavelength.

Fogging Over - A study trip brings Mel and Lola to Victorian London - but cosmic outlaw-turned-returning angel Brice is coming along too, and Mel gets jealous of his relationship with Lola.

Fighting Fit - A mission in the Roman Empire under Emperor Nero's rule has Mel looking out for a young girl with a spiritual sense.

Making Waves - Brice, Lola and Mel enter the HALO awards, but when they wind up in seventeenth-century Jamaica and both Brice and Lola lose their memories and believe their cover stories, Mel has to keep the team together on her own.

Budding Star - After a panic attack on a mission, Mel considers quitting, but ends up on a mission in Limbo with Reuben, chasing the soul of a Japanese pop star.

Keeping It Real - After eighteenth months in Heaven, Mel has to go back to her old home and rescue her human friends from the powers of darkness.

Going For Gold - Mel's upgrade causes her to go off the rails and is brought face-to-face with her dark side.

Feeling The Vibes - Obi, Mel's favourite kindergartener, is a Bodhisattva and she, Reuben and Brice have to take him to present-day India and wait until the monks come for him, but matters are complicated when Obi starts freefalling through time.

Living The Dream - A Creation angel has told Mel that she plays a part in saving the world, but first, she volunteers to be the guardian angel of a troubled girl in care.