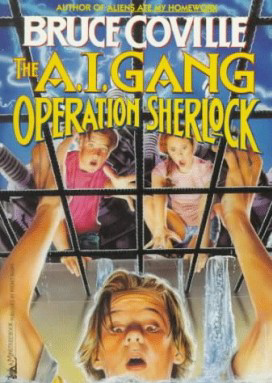 The A.I. Gang series is a children's series written by Bruce Coville in The '80s and later revised and reissued in The '90s, originating as a "package series" in which Coville would write books 1 and 4 and another author, Jim Lawrence, would write books 2 and 3. However, Lawrence fell behind on the work and Coville, at the publisher's request, wrote book 3 instead. After the original editions went out of print, Coville bought back the rights to his three books, rewrote them from the ground up and published the new editions in 1995. Changes included moving the setting (the series took place on Ancoteague Island off the Outer Banks of North Carolina in the original editions, but the revised versions changed this to Anza-Bora Island in the South Pacific, somewhere east of Australia) and writing around the events of The Cutlass Clue since it hadn't done much to advance the plot.

In both editions, the series tells the story of five genius kids — redheaded twins Rachel and Roger Phillips, the bespectacled Raymond "Ray" (or "Gamma Ray") Gammand, the extremely tall Tripton "Trip" Duncan Delmar Davis, and the equally pint-sized Wendy "Wonderchild" Wendell III — who have been dragged off to a remote island so their scientist parents can work on the ultimate computer project: creating a machine that can truly think and know that it's thinking. Upon discovering this, the kids decide to beat their parents at their own game by creating Sherlock, an A.I. crime-solver. Later joined by Hap Swenson, whose father runs the island's motor pool, they soon discover the project and its scientists are being targeted by multiple organizations, each with their own goals.

The original print run consisted of four books, all originally released in 1986:
Advertisement:

The revised versions consist of the following, all originally released in 1995: