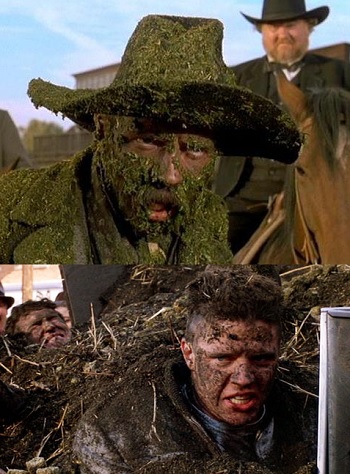 "Who's that?" "Must be a Tannen."
"How can you tell?" "He's got shit all over him."
"History doesn't repeat itself, but it rhymes."
— Mark Twain
Advertisement:

Yes, Lamarck Was Right. But this is getting silly.

Not only has our hero discovered his Secret Legacy and realized that, due to his Superpowerful Genetics, he's inherited all of Mom and Dad's abilities (including the ones courtesy of Charles Atlas)... he's found out that he's destined to live out a replay of their lives.

They will meet the same people their parents met, or, if this isn't possible, they will have an equivalent. If Mandy's best friend when she was a child was Polly the Soapbox Sadie, her daughter Mindy will befriend Paula the Soapbox Sadie on her first day of school. Sometimes it's just a coincidence when the child seems to gravitate towards the same type of people as their mom and dad were, but often the new associate will have some direct tie to the parent's past or be a Generation Xerox themselves. Even Love Interests and relationships tend to get copied whole cloth, whether as the descendants of two Star-Crossed Lovers or the child of the Official Couple from a Love Dodecahedron becoming the target of the new generation of Cupid's Arrows.

Often, certain key events will happen exactly as they did in the past. Turn Out Like His Father is most likely to fail when crossed with this trope. In many plotlines, however, the outcome will change at the last moment since The Hero has heard the story from their parents and had the time to work out what went wrong and how to change it.

Mentors who become parental figures will also tend to pass on their life story, although karma rather than genetics will be held responsible for the resulting deja vu.

When it's only the appearance that's the same between generations, it's likely an instance of Strong Family Resemblance. If the similar appearance is sustained over a lot of the family tree, rather than just parent and child, it's Uncanny Family Resemblance. If this is done by using the exact same actors to portray both ancestors and descendants, you have an Identical Grandson. If only the parents' name are inherited, then it's the case of Ancestral Name.

Maddie's TO learns that Maddie has both parents who've been career law enforcement personnel.

Maddie's TO learns that Maddie has both parents who've been career law enforcement personnel.