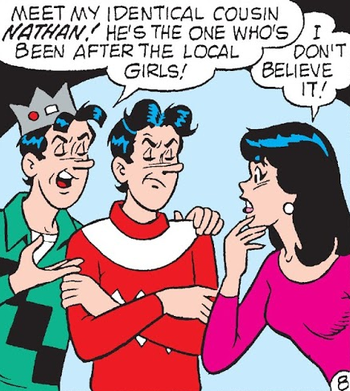 "Is there a Tannen in every century!?"
— Marty McFly, Back to the Future The Animated Series
Advertisement:

Family members tend to look like each other. Normally, this follows bloodline — you tend to look a lot more like your parents than you do your second cousin, for example. Generally, only identical twins can pass for each other, and even then visual differences arise from developmental influences.

Media, on the other hand, are a little loose with the rules. Especially when it gives the chance to put an actor into a totally new role, or reuse a character design. You see the reused version in animation from both the East and West because it is pretty easy to just slap a wig on the guy and call him a new person.

While the Identical Grandson can marginally argue that it is not unknown for direct descendants to bear uncanny resemblance to a forebear, the idea gets very shaky for other relations. When a show tries to pass off a male actor in drag as their visiting aunt, or when somehow a character resembles the man who adopted their great-great-grandfather, it gets flat out weird and hence is usually played up for comedic value. There is a bit of a sub-genre of films that rely on this gag. Eddie Murphy has done a number of them.

A Sub-Trope of Strong Family Resemblance, which concerns the immediate family (usually parent and child). See also Acting for Two and You ALL Look Familiar, which is more of an Enforced Trope.