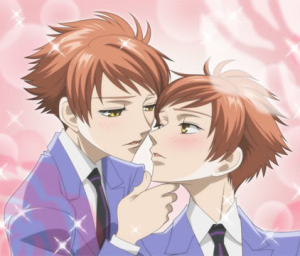 It's just brotherly love.
"Jaime and I are more than brother and sister. We shared a womb, came in to this world together. We belong together."
— Cersei Lannister, Game of Thrones, "You Win or You Die"
Advertisement:

Popular culture often expects twins to share everything, including, it seems, their beds. It's a particularly common trope in Slash Fic and Rule 34, though it does occur in mainstream fiction often enough to be a discernible trope.

It's especially common as a way of making Creepy Twins just that much more disturbing, often as a form of Villainous Incest. For Yuri Fans and Yaoi Fans who became fans at least partly because they see a forbidden appeal to such relationships, twincest supercharges that part of the appeal. Though twincest is not necessarily homosexual — heterosexual Half-Identical Twins tend to have the highest rate of twincest.

A common twist in Twincest — and in Brother–Sister Incest in general — is Surprise Incest: for a couple to fall in love, only to find out later that they're related. (See Genetic Sexual Attraction.) The fact that Separated at Birth is already a common twin trope reinforces this. How far their relationship goes before they discover this generally depends on whether the plotline is supposed to be humorous or tragic.

In other variations, the twins know perfectly well that they're related, and might like each other all the more for it—if you believe in One True Love, soulmates being born together does make a certain kind of sense. Mindlink Mates and Twin Telepathy definitely have parallels. Ultimately, although this is fairly exploitational, such a rationale is the simplest and most common in modern works where twins enter into romantic or sexual relations deliberately and voluntarily. Commonly, the twins in question believe they're soulmates, but everyone else has a "No. Just... No" Reaction.

An old Japanese myth says that if two star-crossed lovers commit dual suicide, they get reincarnated as twins. This may be one of the factors in the frequency of Twincest stories in anime. In this case, Red String of Fate and, as a whole, esoteric-religious motives such Reincarnation Romance can be used as a justification for obviously taboo relations.

In a broader religious or mythological context, this trope can be regarded as Older Than Dirt, given the many similar myths in different nations where twincest is directly mentioned or implied in the context of couples from Half Identical Twin gods who are portrayed as appointed to become husband and wife, or as the first people in general.

If the twins have a child together (oh hey there, Joffrey!), that may be known as twinbreeding.

A subtrope of Brother–Sister Incest. If it's just implied, then it overlaps with Incest Subtext. It's also important not to make mistakes with other Brother–Sister Incest couples, since, due to the popularity of this trope and the idea of a spiritual bond of twins, many "ordinary" couples between brother and sister can imitate many twincest cliché elements. And of course, sometimes even Twincest isn't quite incestuous enough for the writers, and that's when you get Screw Yourself.