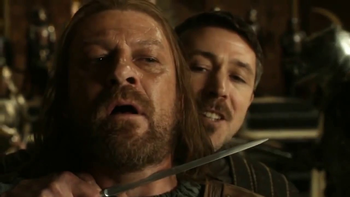 Morning breaks over an army camped on the borders of the Riverlands, where Jaime Lannister gloats over the raven sent by the Hand of the King last episode. His father, Lord Tywin Lannister, is having none of it. He gives Jaime the kind of verbal bitch-slapping that no one in this series has ever given to anyone, much less the Kingslayer, all the while skinning a Stag (very symbolic). "Stop being a Slave to PR," he says, "and teach Catelyn Stark that kidnapping Lannisters is a bad idea. The family name is all that matters." Jaime, who shares Tyrion's quality of having a glib answer for anyone, is speechless in the face of his father. That should tell you something about Tywin Lannister.

In King's Landing, Eddard Stark meets with Cersei Lannister in a secluded courtyard of the Red Keep. For a change, no one offers to seduce her, nor her to seduce anyone. Instead, Ned asks her about the Twincest he has deduced from the color of Joffrey's hair. Cersei confirms it without shame. Ned tells her to flee the city before Robert returns from his hunt, and Cersei warns him to watch his step as well: "When you play the Game of Thrones, you win or you die. There is no middle ground."

Next comes a sexposition scene where Littlefinger watches his new hire Ros perform and delivers a major dollop of motivation while he's at it, including when he dueled Brandon Stark (Ned's older brother) for Catelyn's hand. This is reproduced below, so we'll skip over it, much as a fair number of fans wished they could have, and instead go to Winterfell, where Osha is now a servant and Theon teases her about her bondage before Maester Luwin reminds him of his own chains. Osha, when asked by Luwin why she came south of the Wall, answers that she was running; something ancient, powerful and evil is reawakening in the far north...Finally, we complete our northward migration at the Wall, where Jon and Samwell happen to be on watch when Benjen Stark's horse returns from his ranging. ...His horse, but no Benjen.

Now it's back to King's Landing! Eddard finds out that Robert has returned from the hunt when Renly runs up with bloody hands and a panicked expression. In the king's chambers, Robert is saying a good-bye to Joffrey and apologizing for being a Disappeared Dad all these years. Hmm, this bodes well. When Ned shows up and peels the bedsheet back, it's pretty much as it seems. Robert confesses that it's entirely his fault: "Too much wine, missed my thrust." He makes plans for the funeral feast and then dismisses the others so that he can dictate his will. He names Ned Lord Regent and Protector of the Realm, "until my son Joffrey comes of age." Ned, unwilling to tell his dying friend the truth, substitutes this with "my rightful heir," intending that the throne should pass to Stannis. Robert also rescinds his kill order on Daenerys.

Outside, the members of the small council fret over what will happen next. It's Varys who has the amusing question of who made sure Robert was sufficiently sloshed. It was Lancel "More Wine Your Grace?" Lannister, of course. Ned passes on Robert's request to remove the "Kill Daenerys Targaryen" order from the action queue, but Varys reports that it's probably too late.

If the next scene is any indication, it's not. Near Vaes Dothrak, Dany is combing out her husband's Rapunzel Hair and seems quite the opposite of corpselike; in fact, she's trying (in mostly fluent Dothraki) to convince him to invade the Seven Kingdoms. Khal Drogo is largely unimpressed, and Jorah the Andal is of similar mind as they walk to the market. Jorah takes his leave to seek out news from Westeros, and he gets some: one of the Spider's "little birds," who hands him a royal decree lifting his exile. Meanwhile, Daenerys stops to shop with a wine merchant selling vintages from the Seven Kingdoms. When he finds out who she is, he offers her one of his best wines from the Arbor... but Jorah Mormont, swooping in from nowhere, demands the cask be broached. The wineseller, growing increasingly frazzled, follows Jorah's orders and pours a cup. Jorah makes him taste it first. The wineseller runs... but not very far.

Up at the Wall, a graduating class of recruits are promoted to sworn Brothers of the Night's Watch. While most of them swear their oaths in the sept, Jon chooses to take his vows before a heart tree, which can only be found on the other side of the Wall, and Sam asks to go with him. The recruits are then assigned to the various departments of the Watch—Builders, Stewards and Rangers. Sam, of course, will be a steward under Maester Aemon; Jon, an excellent rider and swordsman and nephew to the current First Ranger, expects to be named a ranger as well, but is furious to find he's been named a steward, and will squire for Lord Commander Jeor Mormont. He throws a tantrum, convinced Ser Alliser Thorne has managed to wreak some petty revenge, before Sam points out that he will be attending The Old Bear in official matters and will be involved in everything. In the book Sam further points out that his own father, Randyll Tarly, required him to do the same until he got himself an heir more to his liking, lending credence to his conclusion: "He wants to groom you for command!" Jon, though still desirous of the office of ranger, decides to sweat it out and see where his path takes him.

At King's Landing, as Ned hobbles through the halls of the Red Keep, Renly accosts him, offering him a hundred swords with which to separate Joffrey from his mother: "He who holds the king holds the kingdom." He also proclaims that he himself is best suited to be king, dismissing his older brother Stannis with a wave: "Yes, he's a good soldier, everyone knows that. So was Robert. Tell me something: do you still believe that good soldiers make good kings?" Ned, clinging to Honor Before Reason, turns Renly down flat. He writes a letter to Stannis explaining his intentions to turn the throne over to him, and then entertains an audience with Littlefinger. Baelish advises that Ned make peace with the Lannisters, ingratiate himself with Joffrey, and play the long game. But one look at the Valyrian steel dagger, the one Lannisters sent to open his son's throat, is all it takes to for Ned to make his decision. "So it will be Stannis, and war?" Littlefinger says. "So why did you call me here? Not for my wisdom, clearly." The answer is that Ned needs the City Watch, and Littlefinger spends some time chortling over Ned's inability to actually say the word. But that's what's called for, and that's why Ned called him.

At the Wall, Jon and Sam set off to the weirwood where they will say their vows, several rangers and Ghost in their company. After they say their vows and are welcomed by their new family, Ghost emerges from the white gloom with a grisly token. It's someone's hand.

Near Vaes Dothrak, Daenerys and Ser Jorah have the poisoner tied up for Khal Drogo's inspection. To the khal's credit, his first concern is for his wife; he embraces her tenderly, which makes Jorah the Andal feel uncomfortable. Drogo rewards Jorah for his actions with the pick of his horses. Drogo then pledges a gift to his unborn son, the Stallion who will Mount the World: "the iron chair his mother's father sat upon." His khalasar sets out the next day. To quote the book: "The wineseller hurried behind them, naked, on foot, chained at throat and wrists. His chains were fastened to the halter of Dany's silver. As she rode, he ran after her, barefoot and stumbling. No harm would come to him . . . so long as he kept up."

Dany: And when he falls?
Jorah: ...I saw a man last nine miles once.

The final scene takes place in King's Landing, where Ned is being summoned by "King" Joffrey to the throne room to swear fealty to the new monarch. Littlefinger meets him outside, confirming that he has the gold cloaks, as does Janos Slynt, Commander of the City Watch, but Varys mentions that Renly has fled the city, the Knight of Flowers alongside him. Ned tries to defuse the throne room situation by handing over Robert's will, indicating Ned's own stewardship of the realm, but Cersei simply rips it up. "We have a new king now." When the situation comes to swords, Ned summons his new City Watch, who take their spears... and turn on the Stark contingent, slaughtering Ned's remaining guardsmen. Ned goes for his sword, cane be damned... only to find Littlefinger is already behind him, with a knife to his throat. "I did warn you not to trust me."