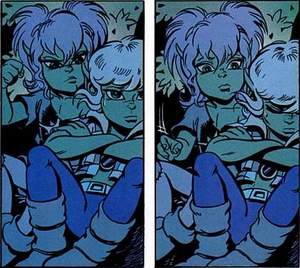 She's angry at him. He was already hurting. She realises and that look tells us she understands.
Elizabeth could not help observing [...] how frequently Mr. Darcy's eyes were fixed on her. She hardly knew how to suppose that she could be an object of admiration to so great a man; and yet that he should look at her because he disliked her, was still more strange.
— Pride and Prejudice
Advertisement:

The Meaningful Look is a staple of drama in all visual arts, and is often used in comedy as well. From the regretful smile of The Hero who is about to make the Ultimate Sacrifice to the wink of the captured rogue to signal his hidden rescuers, much can be said without words. It can indicate a secret, a character knowing more than they let on, or the scene may involve a person in front of whom the character cannot talk openly.

There are two types of Meaningful Look: Between characters, in-universe. Or from the author to the audience via a character, but if the look is Breaking the Fourth Wall, that's an Aside Glance.

Because facial expressions are used as a part of communication all the time, this trope is only for examples where the look is used as a substitute for speech or the look conveys a fairly specific message.

Related to Facial Dialogue, which is about whole conversations happening silently through expression or characters normally or habitually communicating this way, but Meaningful Look is a single look only. In deciding whether or not to place an example here, consider whether or not the character(s) normally or habitually communicate by Meaningful Looks or whether an entire conversation is being held by looks only. If either is true, the example probably belongs in Facial Dialogue instead of here.

The Meaningful Look is a supertrope to:

Not to be confused with Meaningful Appearance.