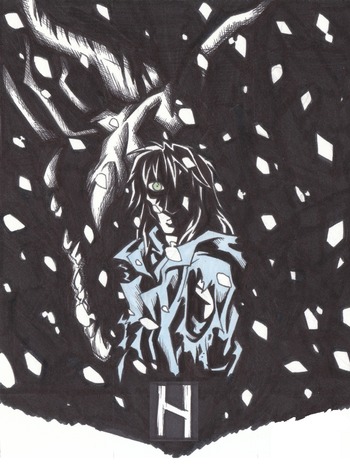 Abraxas is a Godzilla MonsterVerse fanfiction written by Hrodvitnon

, which is available to read on FanFiction.net

and Archive Of Our Own

Set after the events of Godzilla: King of the Monsters (2019) and diverging from the MonsterVerse continuity before Godzilla vs. Kong, the story's set-up in the first chapter is that not only does King Ghidorah's severed head still contain San's (also known among the fandom as "Kevin") living mind, but it’s also carrying Vivienne Graham's Only Mostly Dead body after she was Swallowed Whole by Ghidorah's central head during the film — San is reviving and regenerating her to form a new half-human, half-Ghidorah Kaiju chimera; with San and Vivienne's minds residing in separate heads on her transformed body as "brother and sister". Caged by Alan Jonah and his mercenaries in an unknown location after the duo's painful rebirth, Vivienne suffers from PTSD and warily makes a truce with San so they may escape to freedom. The story follows the fused siblings' building relationship and their struggle to avoid slipping to their pain and madness.

As of December 2021, the story has the fourth-highest hit count and the twenty-first highest Kudo count of any story in the Godzilla: King of the Monsters category on AO3.

Status: Completed as of October, 2021

Official description: "Within the head lies the seat of the soul. Despite all appearances, Dr. Graham didn't die that night. Ghidorah has plans for her, punishment for her efforts to contain him. He will remake her in his own image. And now Jonah has them both. But things rarely go according to plan, and the head left behind to keep her is too curious for his own good. Far too curious... and far too eager to learn."

The author has announced she will not be writing a sequel and has instead encouraged readers to create their own Recursive Fanfiction for the AbraxasVerse, although she has posted a timeline which describes significant events during the four years following the main story's ending

. Recursive Fanfiction sequels that have been published as of July 2022 include a trilogy of one-shots (an outdated original version

and an updated "Second Edition"

) and Abraxas: The Clash of Silver

Post-completion, the author has also posted a playlist

The main story contains examples of:

Universal tropes and tropes featured in the Timeline: