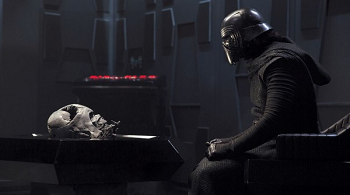 Nothing will stand in our way. I will finish... what you started.
"The evil that men do lives after them; the good is oft interred with their bones."
— Antony, Julius Caesar
Advertisement:

This trope is when even though the villain of a work is no longer around, the plot continues to be driven by things they did while alive. This can be done by their organization being taken over by someone else, their descendants being evil themselves, someone continues their plans without them, and so forth. If it's an ongoing series where one way or another every villain can be traced back to the first one despite his defeat, it's this trope.

This trope is not, however, when the original villain is no longer in the spotlight but still manipulating things behind the scenes as The Man Behind the Man or The Man Behind the Monsters. For a true Villainous Legacy, they must have actually been defeated and are no longer the main threat. This trope can still apply if the villain is still around, as long as they are no longer the primary antagonist of the current story.

Compare Predecessor Villain, Hijacked by Ganon, As Long as There is Evil, and My Death Is Just the Beginning, each of which can overlap with this trope. Contrast Eternal Hero, which is the heroic version. See also Someone to Remember Him By, Leaking Can of Evil, Evil Tainted the Place, The Remnant, Avenging the Villain, which can be assorted ways this trope is invoked. Also contrast Greater-Scope Villain and Villain of Another Story, which are active forces of evil who are just not concerned with the current plot.

NOTE: Because this trope focuses on a villain being behind other events in a series (and often dead themselves), expect unmarked spoilers.