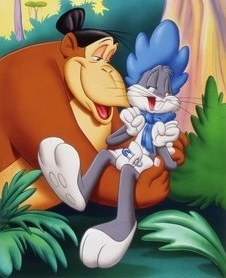 Characters wearing clothing they're way too old for is always funny. But's it's even crazier when they decide to wear clothes meant for literal babies! Bonus points if they act like a baby too while in the clothes.

Basically, a character (usually a petite adult, but a child can attempt this too) dressing themselves up and pretending to be an infant for ludicrous reasons attaining to the plot. Keep in mind that, sometimes, this trope may have happened against a character's will thanks to their partner-in-crime's schemes.

A possible scenario has said tiny character needs to infiltrate somewhere, but the problem is, how can they do that if they're so small in stature, and therefore reaching any windows would be difficult? The solution: Passing themselves off as a Doorstep Baby! And when their unwilling victim takes them inside, Hilarity Ensues.

Sub-Trope of Adults Dressed as Children.

One McDonald's commercial has Ronald McDonald explain how he and Grimace met when they were babies.

One McDonald's commercial has Ronald McDonald explain how he and Grimace met when they were babies.