The Man Behind the Monsters 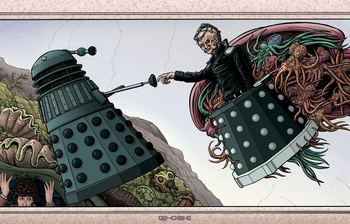 So Davros created the Daleks in his own image, and Davros said unto the Daleks, "EXTERMINATE!"
Image

"I gotta hand it to that Kurata, he really knows his monsters. Guess it takes one to know one."
— Ivan, Digimon Data Squad
Advertisement:

Every horde of monstrous mooks will be led by a powerful and (relatively) human-looking figure. If the mooks are already vaguely human, the leader will be downright gorgeous. There's no stated reason for the use of this trope, but it allows for the heroes to have someone in the enemy camp with whom they can interact, and a slavering monster does not make good drama (fear, revulsion, terror, yes. Drama? Not so much). Otherwise, they're essentially fighting an enemy with all the charisma of a wave of lava.

Frequently, the mooks are themselves incapable of organizing into a vast army. Those dirty monsters can't do anything without a proper HUMAN leading them! Subversively, they may turn out to have been Good All Along and bullied by the Big Bad into evil. Beauty Equals Goodness on its ear, as it were.

The Pretty Guys Are Stronger is a Sister Trope. The analogue here is that the leader (who is the most powerful) looks the most human, and the weaker the subordinate, the more wild or mindless they become. The Dragon and his lieutenants occupy a curious niche in all this: while they also benefit from this trope and, in fact, tend to look the most human on the villainous side, it's because they aren't so powerful as the leader. Confused? So are we. It does, however, tend to telegraph a Heel–Face Turn, though not always.

On the opposite end of the spectrum, evil members of good or neutral species are generally more monstrous than their good counterparts.

Contrast Not Even Human, where only the boss is a monster. Also related to the Bishōnen Line.

Alternative Title(s): The Woman Behind The Monsters