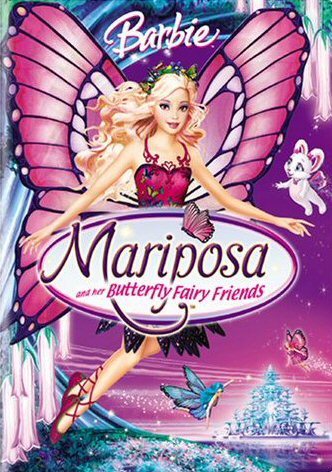 Barbie: Mariposa (also billed as Barbie: Mariposa and her Butterfly Fairy Friends) is a side-story to the Barbie Fairytopia trilogy. It is also the twelfth installment in the Barbie film series, releasing in 2008 in between Barbie as the Island Princess and Barbie & The Diamond Castle.

Mariposa is a butterfly fairy who loves to read and dream about the world outside her home in the land of Flutterfield. Flutterfield is kept safe from the vicious, fairy-eating Skeezites by Queen Marabella's magical lights. When the Queen's attendant, Henna, poisons her in a bid for the throne, the lights begin to go out one by one. Mariposa and her friends must journey beyond Flutterfield to save the Queen before the lights go out for good.

A second Mariposa movie, Barbie: Mariposa and the Fairy Princess, was released in 2013.

The most beautiful thing you can be is yourself.
— Barbie
Feedback

The instant Queen Marabella awakens after being healed by the antidote, all the Flutterfield lights reignite in a flash.

The instant Queen Marabella awakens after being healed by the antidote, all the Flutterfield lights reignite in a flash.