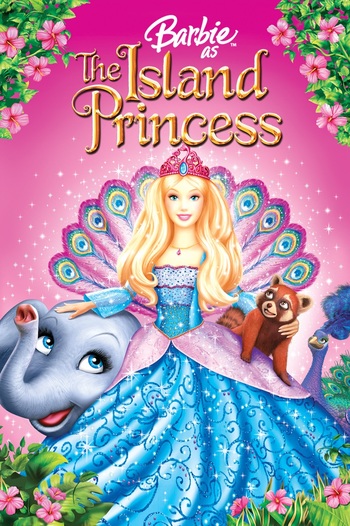 'Barbie as the Island Princess is a Direct to Video Barbie film released in 2007, preceded by Barbie Fairytopia: Magic of the Rainbow and followed by Barbie: Mariposa.

The movie tells the story of a girl lost in a shipwreck and raised by the animals on a tropical island. The girl suffers from amnesia, and the only clue to her past is an item with a fragment of her name, "Ro" (short for "Rosella"). When she's grown up, Prince Antonio finds the island, and after Ro saves his life, he offers to take her to his home, and she comes along to find out about her past.

One the way home, the two start to fall in love, but Antonio's father, Peter, arranged a marriage to Luciana, a princess of another kingdom. Unfortunately, that lady's mother, Ariana, is holding a grudge against Peter and his family, and is planning to murder them at the wedding.

Example of:
Happily Ever After