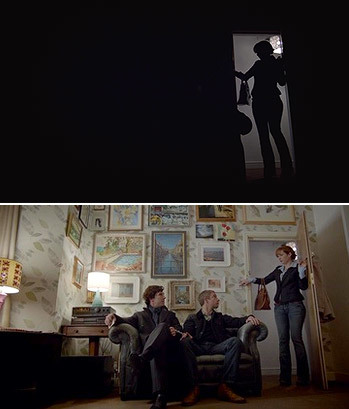 Why were you sitting on my couch in the dark?
A character enters a location, and it's dark. The first course of action is to switch on a light, be it from an actual lightswitch on a wall or one's portable light source. And... Surprise! In the room is an unexpected sight. Perhaps the character is in a lot of danger now, or at least some trouble. Or maybe it's just a Surprise Party.
Advertisement:

This trope covers a situation in which a reveal of somebody's presence is made by turning on a light. Supertrope to Matchlight Danger Revelation, which involves going to a dark location and revealing danger via a lit match. The surprise might be part of a Caught Coming Home Late situation: someone waits — often in the dark — for another who's coming home past curfew.

If a light isn't turned on but a character is revealed as they walk out of the dark, it's Emerging from the Shadows. A dangerous entity waiting in the dark for someone in that person's own home who only wants to speak with them is Trespassing to Talk.