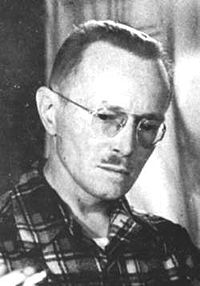 Fredric Brown (October 29, 1906 – March 11, 1972) was an American Science Fiction and Mystery Fiction writer, author of What Mad Universe, Martians Go Home, and countless short stories. One of his most famous short stories, though often misattributed, is "Answer", in which all the computers in the world are linked together to form a single supercomputer capable of determining whether there is a God. His short story "Arena" has been adapted for television several times, most famously influencing an episode of Star Trek: The Original Series.