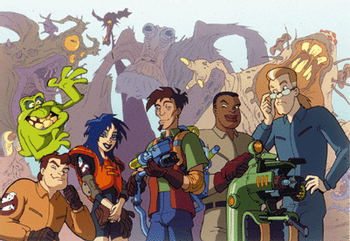 You know who to call!

Developed by Jeff Kline and Richard Raynis, Extreme Ghostbusters is a Sequel Series to The Real Ghostbusters (which was itself a Spin-Off of the first Ghostbusters film), airing for one season starting in late 1997.

The show takes place ten years after the original Ghostbusters disbanded after they captured all the ghosts. While Ray Stantz, Peter Venkman, and Winston Zeddemore move away, Egon Spengler stays in New York City, living in the Firehouse with Slimer, maintaining the containment unit, and teaching as an instructor for the class "Paranormal Phenomena 101" at a community college. But when construction workers inadvertently release a new breed of ghosts, Egon has little choice but to form a new team of Ghostbusters using his students: standoffish Goth Kylie Griffin, wisecracking slacker Eduardo Rivera, Gadgeteer Genius Roland Jackson and Handicapped Badass Garrett Miller. Janine Melnitz, Egon's fifth and final student, returns to work as the Ghostbusters' receptionist, accountant and collector. Slimer returns to his role as Non-Human Sidekick, when he's not eating everything in sight.

The show ran for 40 episodes and apparently was only ever intended for one season, though went out on a high note.

In 2013, an alternate version of Kylie, now a protégé of Ray instead of Egon, appeared in IDW Publishing's Ghostbusters comic book which mainly follows the movie continuity.