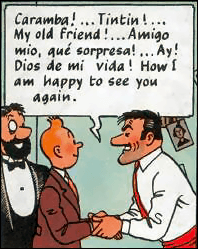 Since a good amount of TV is produced in California, specifically southern California, which shares a border with Mexico, and since Spanish is the second language of the United States with a 13% share of speakers as of 2021, it is only natural that American TV writers would insert Spanish words and phrases into their series to make things seem more foreign. This trend has become popular in Japan recently, though it has a ways to go before it becomes as popular as German or English. But since more and more people in the US speak Spanish (and Spanish-speakers are increasingly present in all professions and classes, including entertainment), Spanish is becoming more and more common in both fiction and real life.

While more realistic "Spanglish" usage and code-switching has slowly become more common in media as a result of the above, this trope traditionally (and most often) comes in the form of a given work's resident Spanish speaker only using Spanish terms that most English users know (such as "sí" meaning "yes", or "amigo" meaning "friend") but otherwise speaking in perfect English. It's a way for the writers to remind us that the character is from a Spanish-speaking country and therefore exotic, but exactly why the character needs to slip back into Spanish for such simple terms is never quite explained. In certain places, such as Southern California, the high number of Spanish speakers makes a cursory knowledge unavoidable, and even non-native speakers will use common Spanish nouns or verbs in conversation, but never common English particles, even among people who primarily speak Spanish. For example, no one in history who has spoken any level of English has ever code-switched between ultra-basic words like "yes" and "si", "sir/Mr." and "señor", or "hola" and "hello". See also Poirot Speak.

This is very, very common among childrens' educational shows, both live action and animated. The Primo Óliver may be added to existing shows, or by starting with the Five-Token Band right off the bat. It will obviously carry over to any branded books, video games and web site/games, too.

See Everything Sounds Sexier in French for some of the connotations of the use of Spanish, such as the average Internet male talking about Salma Hayek or Penélope Cruz. Compare also with El Spanish "-o". For the actual Spanish language, see Spanish Language.

This line from Grand Theft Auto: San Andreas, which combines this trope with Poirot Speak.

This line from Grand Theft Auto: San Andreas, which combines this trope with Poirot Speak.