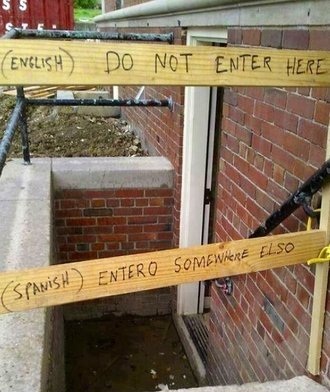 No problemo. note It's actually "No entrar aquí," and "Entre por otro lado." And it's "No problema", for that matter.
"...Then this kid gets up and he starts running around with his dick flapping in the air, screaming 'Help! Help!' I don't know what that is in Spanish. 'Helpo! Helpo!' Whatever it is.”
— Dave Attell, Skanks for the Memoriesnote It's actually "¡Ayuda! ¡Ayuda!"
Advertisement:

People all over the world are in contact with people who speak other languages. Much of the time however they cannot actually speak other people's languages. Sometimes, usually as a joke, they will try to "speak" the language by taking words in their own language and then adding stereotypical linguistic markers of the target language in an attempt to fake it.

This is usually a joke, but sometimes it's just plain desperation, if not outright insensitivity. In the U.S., Spanish is the language that most commonly gets this treatment, with the article "el" being put in front of English words and the masculine ending "-o" being put on the end. For example, an English speaker who wanted beer might ask a Spanish-speaker for "el beero," when it should have been "la cerveza." Other languages get this treatment too. French, for example, will have the masculine article "le" placed in front of English words with the ending "-é" occasionally added. Italian will have "La" in front of words, an "a-" prefix ("It's a-me, Mario!") and another suffix "-a" added after. Russian will get "-ov" or "-ski" (or "-ovski") added to the ends of names and words, Latin with "-us" or "-um," German with "-en," Chinese with "-ee" or "-ing," Portuguese with "-eiro" or "-inho," Japanese with "-ru" or "-desu/masu," and Greek with "-on" or "-tron" (to make Sci-Fi jargon). English itself in some languages takes this treatment with words ending with "-ing" or "-ation".

Actually has a small bit of Truth in Television, as some Spanish words are English loanwords, so when they are preceded by an article we have terms such as "el jazz", "la radio", and "el golf". Spanish has more English cognates than any other language, so people may feel they're at least somewhere in the ballpark. And while "Russki" sounds like an English word made up for dog Russian, it really does correspond to the proper romanization of the Cyrillic word that Russians use to call each other.

Sister trope to Canis Latinicus, Ching Chong, and The Backwards Я. Compare to As Long as It Sounds Foreign, which is an attempt to actually use the real language, but getting it right isn't important. Also compare to Gratuitous Foreign Language (which is correct use of other languages) and Poirot Speak. Not to be confused with "El Niño" Is Spanish for "The Niño", which is using correct foreign words, but deliberately not translating them in a context where you normally would. Compare/contrast with Translation by Volume, which is thinking that talking loudly and slowly will make foreigners understand you.

The lighted signs onboard the plane, are in English & Spanish (which is just phonetic English.)

The lighted signs onboard the plane, are in English & Spanish (which is just phonetic English.)