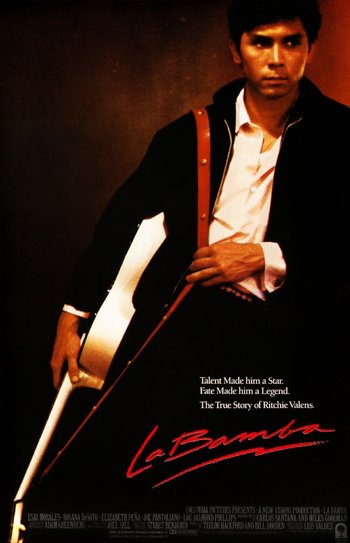 It tells the story of late 1950s Chicano rock star Ritchie Valens, real name Richard Valenzuela, a teenager discovered by Del-Fi Records who had a meteoric rise to fame. That rise was cut tragically short when his life was taken as part of "The Day the Music Died".

The story focuses on his relationships with his mother, Connie Valenzuela; his older half-brother, Bob Morales; and his girlfriend, Donna Ludwig (the subject of his biggest song, "Donna"; it was #3 on the then-new Billboard Hot 100 when he died, and peaked at #2). It deals with Ritchie being discovered, and choosing the road to stardom as he was booked on a national tour over the winter of 1958-59 with fellow rising stars Buddy Holly (Marshall Crenshaw) and J.P. "The Big Bopper" Richardson (Stephen Lee).

A lot of the early events of the film revolve around friction with his girlfriend's father, who had issues with his daughter dating a Mexican-American. Another source of drama is between Ritchie and Bob. Bob, himself a promising artist and aspiring cartoonist, impregnated one of Ritchie's earlier girlfriends, and was forced to marry her.

The film was very popular, and helped lift Lou Diamond Phillips to fame. Its soundtrack went double-platinum in the United States, and finally propelled the titular song, "La Bamba," to Number 1 on the Billboard Hot 100 in 1987. The Los Lobos version was #1 for three weeks in the U.S., and finished #11 on the 1987 year-end chart.