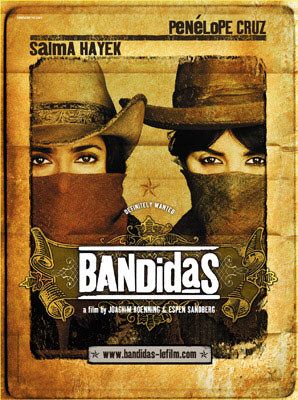 It tells the story of two very different young women, Maria Alvarez (Penelope Cruz) and Sara Sandoval (Salma Hayek). After the death of Don Diego (Sara's father) and the attempted murder of several farmers (Maria's father included), by the hands of an American land baron Tyler Jackson, they join forces to rob banks and give the money to the poor. At first they don't get along very well and can barely rob anything, but after training with a famous bank robber, Bill Buck, they take a level in badass and Maria becomes a Gunslinger and Sara a knife user (something to do with her inability to hold a gun without having hiccups). Later they meet Quentin Cook, a scientist and criminal investigator brought by Jackson to help catch the Bandidas. The girls capture him and, after realizing who's the real criminal, he decides to help them. And then stuff happens...

It is noted for being the first movie in which Cruz and Hayek ever worked together and for its huge amounts of Fanservice.