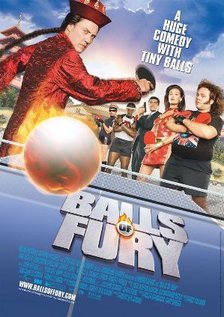 In the world of illegal underground table tennis...
— entirely deadpan opening line from the trailer
Advertisement:

From a slate of obscure-sports sports movie parodies (DodgeBall: A True Underdog Story, Blades of Glory) that were popular in the mid-'00s.

19 years after a humiliating failure at the '88 Olympic Games, ping-pong prodigy Randy Daytona (Dan Fogler) is eking out a living as a trick-ping-pong-artist; on the day he gets fired, he is invited by FBI Agent Ernie Rodriguez (George Lopez) to be the Bruce Lee equivalent in a ping-pong themed Enter the Dragon parody: reclusive criminal overlord hosting exclusive tournament in private fortress.