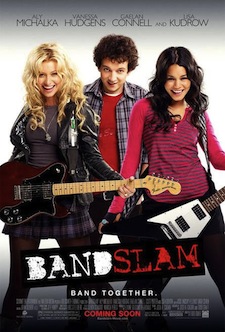 A 2009 teen musical dramedy. Music nerd and David Bowie fan Will Burton (Gaelan Connell) moves to New Jersey, eager to start fresh since he was bullied back at his old school in Ohio. Once there, he meets Sa5mnote the 5 is silent (Vanessa Hudgens), and Charlotte (Alyson Michalka), a former cheerleader who, impressed by Will's knowledge of music, takes him on as the manager of her band (later called "I Can't Go On, I'll Go On") as she tries to defeat her ex-boyfriend, Ben Wheatley, in a music competition known as Bandslam. The film also features Lisa Kudrow as Will's mom, Karen.

The film became infamous for its questionable marketing strategy on the part of Summit Entertaiment, its distributor, who very much Disneyfied the hell out of it in promotional material.

Example of:
My Nayme Is