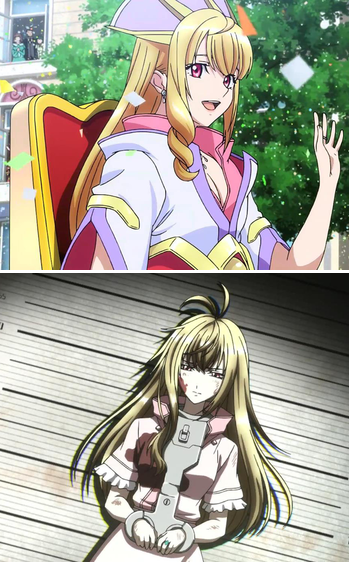 From princess to prisoner.
"To have learnt to live on the common level
Is better…
To be rich and powerful brings no blessing;
Only more utterly
Is the prosperous house destroyed, when the gods are angry."
— Nurse, Medea
Advertisement:

She's got everything: brains, good looks, perfect hair, shiny white teeth, and a body most people would kill for. Of course, this genetic good fortune comes with social perks — so it is that our beautiful heroine is on the cheerleading squad of her local school and dating a jock. She also does her best to avoid the nerds and outcasts, though usually just because she can't afford to lose credibility in her peers' eyes rather than because she's a bully. This is usually emphasized by making her best friend the Alpha Bitch.

But then something happens. Her family loses its fortune, she turns out to be The Chosen One, gets covered in radioactive green goo that gives her superpowers, or whatever. For whatever reason, the very thing that makes her a hero also makes her an outcast. Now she sits on the outskirts of her school's peer groups with a rag-tag bunch of fellow "losers". At first she regrets not being able to rejoin the jet set, but her drop in status opens her eyes to the goodness and decency of the people she once rejected. She becomes a better person, the geeks get a cool friend and all of them save the world and solve mysteries together.

Alternatively, the Fallen Princess can be a secondary character who's initially portrayed as the Alpha Bitch, but is revealed to be insecure or to have other sympathetic traits that make the audience like her, prior to her taking a leap down in the social strata.

This trope appears a lot in science fiction and fantasy shows since their target audience is generally exactly the same kind of geek that the princess ends up hanging out with. Thus they can simultaneously fetishize the cheerleader image while assuaging their perceived audience by confirming their beliefs that all cheerleaders (and people in the higher strata of the school system) are stuck up snobs, with few exceptions. It also lionizes the viewer by showing the geeks to be more interesting and "cool" in their own way than the cliques. Of course, the character doesn't have to be a cheerleader for it to work — just someone who's in a clique of attractive, desirable, and deeply unpleasant people.

Also could work perfectly with actual princesses (or just an upper-crust heroine). A low-life "peasant" or modern equivalent may fall in love with her. But in a random wave of unsurprising angst, says this line, most of the time word-for-word:

If a miracle doesn't interfere, he will then give up completely.

Contrast Alpha Bitch, and King of the Homeless. Compare the Ojou. Princess in Rags is a similar character, but while the Fallen Princess has her eyes opened by her loss of status and adapts to her situation, the Princess in Rags doesn't, remains arrogant and will keep fighting to regain what she lost until the bitter end, but without becoming wiser in the meantime.