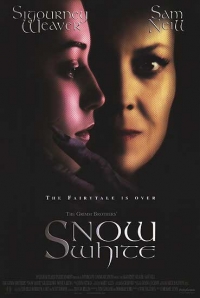 The fairytale is over.
Advertisement:

Snow White: A Tale of Terror is a 1997 Made-for-TV Movie adaptation of the Snow White fairytale, attempting to take the story back to its gothic and grotesque roots. It stars Sigourney Weaver, Monica Keena, Gil Bellows and Sam Neill.

The film opens with a carriage accident, fatally wounding the pregnant noblewoman Lilliana Hoffman. Her husband Lord Frederich (Neill) is forced to perform a medieval C-section to save the baby girl, who is named Lilliana after her mother. Seven years later, Lilli's father is to marry another woman, Lady Claudia (Weaver). The new stepmother is a nice woman but Lilli does not like her and turns up her nose at any attempts at friendship Claudia makes. Nine years after that, Claudia suffers a miscarriage and is rendered unable to have other children. She becomes convinced that Lilli is her enemy and tries to have her killed. Lilli escapes into the forest and hides out with seven gold miners, outcasts from the kingdom.

The film serves to deconstruct the Snow White fairy tale in quite a new way. The stepmother Claudia starts off quite willing to love her would-be daughter. But years of the girl turning away and rebuffing her advances puts a strain on their relationship. It's not until Claudia miscarries that she actually becomes the villain. Many of the more famous revisionist fairy tales likely owe something to this film. Planned for a theatrical release, it premiered on Showtime instead. Sigourney Weaver received an Emmy nomination for her portrayal of Claudia.