Webcomic / The Inexplicable Adventures of Bob! 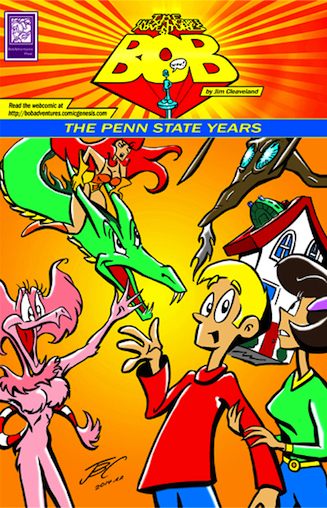 The Inexplicable Adventures of Bob!

is a serialized, science fiction/humor Web Comic by Jim Cleaveland. It began life as a print comic appearing in the newsletter and magazine of PSSFS, the Penn State Science Fiction Society, from 1993-1997, and was revived as a webcomic in May, 2006.

Bob Smithson was the world's most average man, leading a quietly dull life in the suburb of Generictown and reasonably content that way until the day he inexplicably became a Weirdness Magnet. Strange, paranormal things now happen to him almost daily. Unicorns appear in his yard. Dragons perch near his house. Alien spaceships crash into his roof. Actually, anything and everything likes to crash into his roof.

Bob sees it all through with surprising grace because, despite his seemingly infinite normalcy, he does have a few outstanding qualities. He is very kind and doesn't judge by appearances (such that he will give even a three-legged space jellyfish a chance to be friends with him if it is so willing). He has an uncommon amount of Common Sense. And yet he is generally too thick-skulled to fully grasp the frighteningly awesome implications of most of the stuff he encounters.

For a humor comic, the characters show a considerable amount of depth. As absurd as the situations they encounter are, most of the humor derives from how the different characters react to them, and how they interact with each other.

Ran twice a week on Tuesdays and Saturdays for most of its history, then fell into some nasty schedule slip. After announcing a hiatus in June of 2018, the comic resumed in November 2018. Went back on official hiatus in October, 2019, and resumed in August, 2020.

Was one of the very last comics actively hosted on Comic Genesis before that site's final tech crash. It was hosted briefly on Smack Jeeves, but has now finally settled in at ComicFury.

The Inexplicable Adventures of Bob! contains examples of: