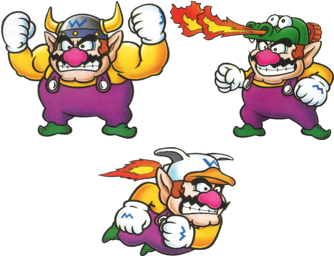 Wario's rather dashing haberdashery.
"There must have been some magic in that old silk hat they found,
For when they placed it on his head, he began to dance around!"
— Frosty the Snowman

Some hats serve more of a purpose than just looking nice. Some even go beyond the mundane purpose of protecting the wearer's head. These Hats of Power grant superpowers, incredible luck, or other special abilities to whatever lucky chump happens to put them on.

Sometimes, this serves as a more vulnerable version of Clothes Make the Superman (or at least My Suit Is Also Super), since a super fedora is more likely to get blown off by a gust of wind than a super suit is.

May also be a Hat of Authority. Super-Trope to Hat of Flight and Crown of Power, Sub-Trope to Magical Accessory.

Compare Pull a Rabbit out of My Hat, Weaponized Headgear and Goggles Do Something Unusual.